How you’re being manipulated by software

(And what you can do about it)

There’s a term we use in software design called the happy path. It describes a best-case scenario, in which customers use a product exactly as intended, without bumping into any edge cases or uncommon problems. This includes the interface you see when you sign up, setup steps you have to complete, and so on.

For software designers, a happy path is also an extremely powerful psychological tool that allows us to control people’s behavior and direct them to do whatever we want.

If that sounds surprising—and slightly terrifying—think about how many times you’ve blown past a lengthy software license agreement and clicked the Agree button without looking.

Were you thinking deeply about what you were doing?

Probably not. And you’re not alone! Research shows that humans have a natural aversion to decision making. As Smashing Magazine describes it, people simply don’t like to make choices unless they have to:

Making an explicit decision requires effort, after all. Time, thought and consideration are often required to determine the best choice. It turns out that people are remarkably sensitive (and averse) to the amount of effort that making a choice demands.

And therein lies the trouble.

If you pay close attention, you’ll notice something else about software happy paths. Like a tell in a poker game, they subtly reveal a company’s underlying motives.

Since designers know you’ll probably avoid making difficult decisions, they can take advantage of your passivity and coax you into doing anything they want.

For example, if you’ve ever installed the Facebook Messenger app, you were likely encouraged to continuously upload all of your phone’s contacts to the service. This is framed as a way to help you text people quickly. 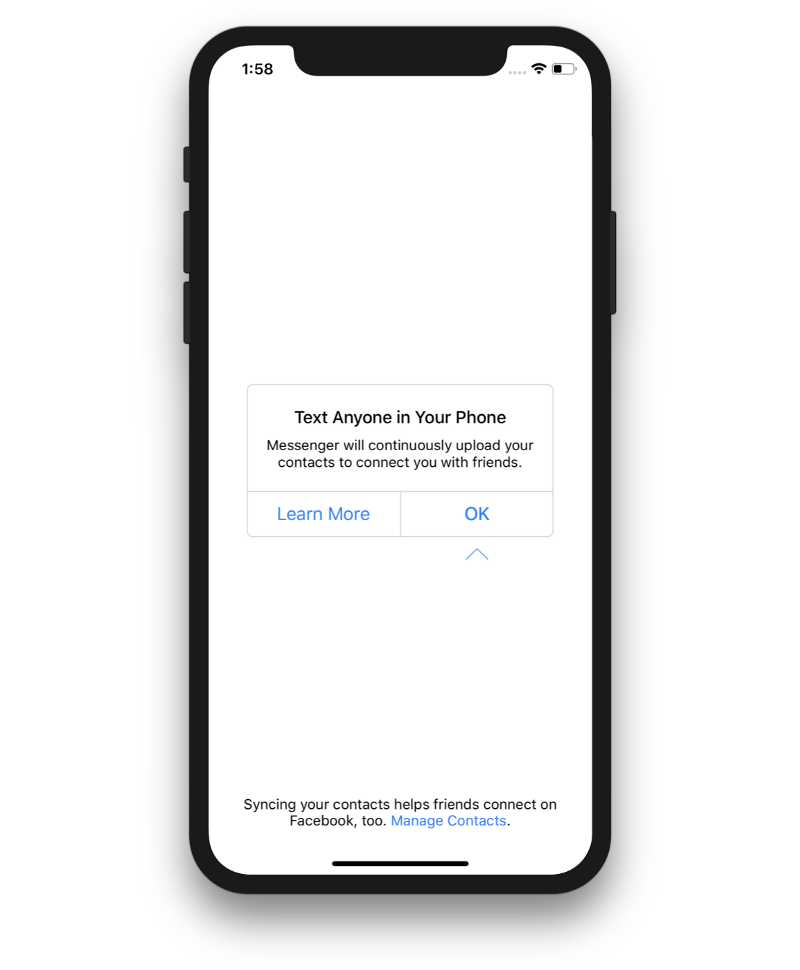 Look at that screen for a moment. There’s no opt out button! You can only choose OK or Learn More.

And who wants to Learn More when they’re signing up for a chat app? Almost nobody.

I’m guessing at least 80% of Facebook’s users just tap OK and move along immediately. There’s even a little animated arrow encouraging you to tap OK, in case you momentarily considered doing something else.

But let’s say you’re among the 20% that happens to pick the Learn More button. You’ll get a cutesy second screen: 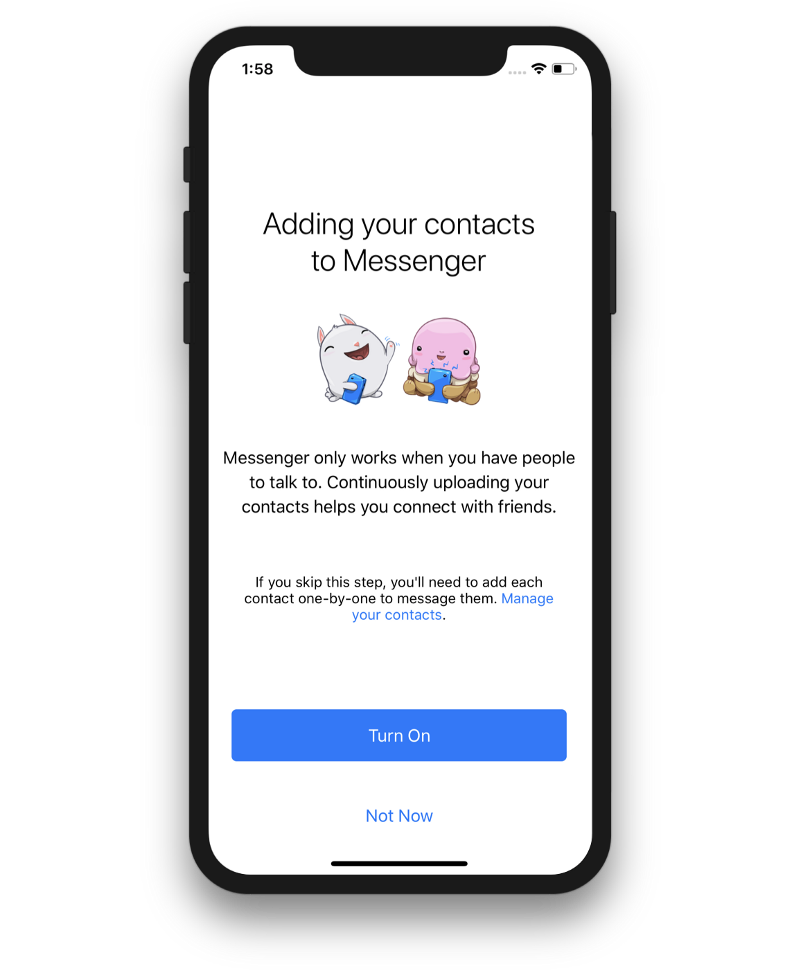 This screen finally has an opt-out button, in plain text, buried underneath some copy that vaguely implies you’re wrong for questioning any of this.

What’s more, Facebook’s designers neglected to mention a rather important detail: continuously uploading your contacts helps them collect a ton of data about people who aren’t even on Facebook.

Tapping that OK button is a trivially small decision. It takes just one minuscule tap of your finger. It’s done in less than a second.

But the impact is quite large indeed! You’re implicitly agreeing to send Facebook little bits of info about everyone you know. Now imagine the network effects when you multiply that by the millions or billions of users who also tapped OK in the blink of an eye.

This little happy path is feeding a massive data beast, which probably has details about almost everyone on Earth. And Facebook had ample space — two separate screens! — in which to mention anything about this.

So why didn’t they?

Because endless growth and data collection is the foundation of their business, and that necessitates doing invasive things to their users.

They need you to feed the beast, and they certainly don’t want you to think about it. So they use cartoon animals and sneaky happy paths to make sure you stay blissfully unaware.

Using software is inherently a handshake agreement between you and the service provider. It’s not unlike paying for a physical service.

The problem is, many of the dominant software makers are abusing your handshake in increasingly dastardly ways. They treat their customers like sitting ducks — just a bunch of data points waiting to be harvested. And when growth slows, they resort to deceptive tactics to keep the trend lines pointing skyward.

So what can we do, as consumers?

First, keep your eye out for sneaky manipulation, especially when you’re first signing up for a service. If you’re asked to share personal information or forced to commit to something that makes you feel uncomfortable, you’re probably being used.

Second, slow down and thoroughly consider the choices you’re making. You’ll end up discovering weird, surprising things about services that you thought were harmless.

Third, be wary of any “free” software platforms. Sure, you’re not giving those companies any money directly. Instead, you’re giving them something else they’ll use to get money — your attention, your time, your personal information—all things that are arguably more valuable than money.

And finally, pay for software! When you pay real money to software creators, you’re supporting them, and they’ll support you in return.

More and more independent software makers are standing up and defending users against data misuse and manipulation. Recently, Feedbin significantly altered their tech to protect their users from being tracked. That’s a great example, and there are many others like it.

Vote with your wallet, and support the people who really do have your back.

This was originally posted on Signal vs. Noise.

Want to get new posts by email?
Subscribe to my newsletter: